How do you get so many well-known people to agree to talk to you? 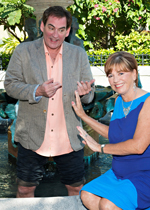 Preparation. Creative thinking. Concise, thoughtful emails and voicemails. Employing an almost superhuman level of patience. And finally, authenticity juxtaposed against Erin Brockovich’s favorite word: stick-to-itiveness. And yes, name-dropping helped a lot, too! Though this was not part of an elaborate master plan, I came to realize how ironic it was that Peggy Post (The Emily Post Institute) and Erin Brockovich are so prominently featured in my book. I came to realize I’m one-part Peggy — an advocate for courtesy, civility and respect — and one-part Erin, a straight-talking Midwesterner with a strong moral compass who wants to love everyone but understands when someone has crossed the line. As Erin says, we both have an intrinsic need to “right wrong.”